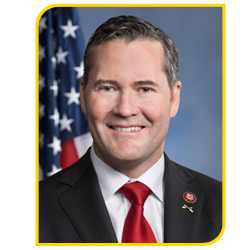 I’m a proud Florida native, a combat decorated Green Beret, a former Fox News Contributor, and a small business owner. I have served my country my entire life, attending the Virginia Military Institute and serving for 21 years in the U.S. Army to the rank of Lt. Colonel. I’ve served all over the world as a decorated Special Forces officer with multiple combat tours to Afghanistan and led the search for Bowe Berghdal. I was awarded four bronze stars including two for valor. I also served in the White House and the Pentagon during the Bush Administration as an advisor and policy director for counterterrorism. I am the father of a teenage girl and I plan to keep fighting for her and all of you in Congress just like I fought on the battlefield.

Serving my country is all I’ve really wanted to do. I have decades of executive expertise as a Special Forces officer, a policy advisor in the Bush White House and Pentagon, a small business owner, an author, and previously as a Fox News Contributor.

I’m a native Floridian. Born in Boynton Beach, FL and raised in Jacksonville, FL. I was raised by a hard-working single mother; the son and grandson of Navy Chiefs.

I was raised with the ethos of service, leadership and hard work. When I look at our current political leadership that is failing us, I once again feel a call to service. It’s the same call to service I felt when I shipped off to the Virginia Military Institute and the same call when I commissioned as an Army lieutenant, graduated Ranger School, and was selected for the elite Special Forces Green Berets. I have felt that call through a 21-year active duty and reserve career and through multiple combat tours in Afghanistan, the Middle East, and Africa. I led the search for Pvt. Bowe Berghdal after he deserted his post and led the call for justice after his return for the all the service-members put in harm’s way.

I continued my service in the Pentagon as a defense policy director for Secretaries of Defense Rumsfeld and Gates. I then had the true honor of serving in the White House as Vice President Cheney’s counterterrorism advisor. I’ve seen first-hand the awesome and difficult decisions a President must make and the value of leadership.

I’ve since co-founded a small business with just a few people working from home to over 400 employees in Florida, Virginia, and nine countries in Europe and the Middle East supporting the defense department with analysis of terrorist financing and specialized training. I’ve seen first hand how over regulation and Obamacare have been huge hurdles to our growth and welcome the tax relief brought by the Trump Administration and Congress.

As a FOX News Contributor, “Michael Waltz brings a unique blend of expertise as a special forces operator and policy-maker” according to Bret Baier, Anchor of Special Report.
I am passionate about bringing complex, difficult issues directly to the American people through in an objective way through Fox News Channel. My passion for service and facing the threats we face is also why I wrote “Warrior Diplomat: A Green Beret’s Battles from Washington to Afghanistan” and contributed to “Drone Wars: Transforming Conflict, Law, and Policy.”  I love digging into practical policy as a Senior Fellow at the Foundation for Defense of Democracies.

Today, Congress fails to get enough done because it is filled with too many lawyers and career politicians WITH THE WRONG TYPE OF REAL-WORLD EXPERIENCE.   They have NOT personally fought terrorists overseas or succeeded in building a business from scratch. One thing Veterans know – regardless of where you’re from or your economic status – is how to accomplish a mission for their country when called upon to do so. This is the warrior attitude I will bring to office.

We need a new generation of leadership in Washington: servant leaders. Leaders who lead by example with their values and deliver results – not excuses. I am running for Congress for the privilege of serving and representing people who deserve a leader who puts their needs and the interests of our country first. I will not make a career of being an elected official and I will not take a pension. That’s not what motivates me.

I’m motivated because I have seen first-hand the human costs of letting terrorism grow unabated, which leads to the killing of the innocent and, eventually, to war.  I, frankly, do not trust enough of our current leaders to wisely spend our blood and treasure.

I’m motivated to lead and I’m ready to fight.

My commitment is the same now as it was in combat. I will serve with everything I have. I will do it without regard for my own self. I will do it with a sense of duty. Most politicians just talk about defending the nation, creating jobs, and supporting Vets… I’VE LIVED IT!

Though my military service may be coming to an end, the battle for our nation’s future has just begun!  Please, join my A-Team in this fight.